Home / Uncategorized / The Chinese Takeover. Is Chinese pool the future?

Is Chinese pool the future? China has been hotly tipped as the next snooker superpower.

China’s got the population numbers, the resources and a stark rise in the nation’s enthusiasm that could pave the way for the next generation of pool and snooker megastars.

2016 marked a momentous occasion in Chinese snooker history when the nation’s prodigy, Ding Junhui, reached the final of the world championships following his meteoric rise to sports superstar. He had China’s undivided attention and consequently tipped broadcasting viewing figures over the mindboggling 210 million mark. Junhui missed out on the top spot that day but still catapulted himself into the hall of fame by becoming the first ever Asian player to reach the final. He is presently considered China’s most prominent and influential sports figure bar none, eclipsing even Hollywood celebrities in popularity.

So, what does China’s unprecedented rise in the appeal of pool and snooker mean for the future of the sport? As favour continues to grow, so too will the impetus driving future players to pick up a cue. It’s already estimated that 70 million Chinese people play cue sports every week already, with figures continuing to grow. In contrast, Western counties receive significantly less exposure compared to the heydays of the eighties, which in turn sparks less inspiration for younger generations to try their hand at the sport.

It’s not only prevalence that’s on the rise in China, resources available too are markedly on the up. Investment, not only in terms of prize money available in tournaments but also for training is rising exponentially. Dedicated facilities are rapidly emerging, like the state of the art CBSA World Snooker Academy in Beijing. Work ethic at the world-renowned facility is such that earmarked talent is meticulously nurtured with relentless hours of practice alongside the very best equipment and trainers on hand to produce the finest results. Education has also followed suit with sport being an underlying theme at the heart of the Chinese school curriculum.

Suffice to say, the world of cue sports is likely to be a very different place for our children dominated by Eastern talent. For the UK, snooker and pool halls still evoke the memories of dingy, smoky venues that were sometimes considered less than salubrious. In China however, players have started with a fresh slate, with the pastime considered a coveted gentleman’s sport. The UK is long overdue a cue sports rebrand if we have any intention of making our mark in the sport in the future; victory in the sport is a legacy we forged decades ago and one that us at CueCases hopes may continue for many years to come. 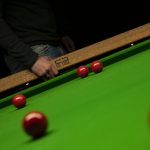 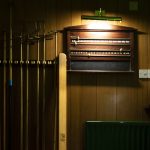